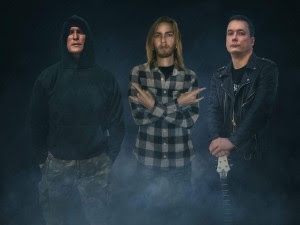 Dark Rites recently signed by Sliptrick Records for the worldwide release of their self titled album.

Dark Rites is an international act founded by Randy (USA) and Wojtek (UK) in early 2016.
Despite its members living in different continents, technology has enabled them to overcome all possible geographical obstacles. After playing in several local bands in the late 90’s and late 2000’s, Randy and Wojtek soon teamed up with Oskar (ex-Disrupted, Sweden), thus completing the line-up. All of DARK RITES’ songs are strongly autobiographical, with lyrics inspired by the band’s beliefs, views and fascinations. Their common passion for metal music – in all of its different facets and sub-genres – really shines throughout the entire length of the record.

Call it Death Metal, Metal Core or even Alternative Metal – The common denominator stays the same: a unique Metal experience.